I wasn't shocked that I had at least 2 or 3 players to update for the Expos, since that was the first team that I completed.  The Padres had 4 players to update, which I either missed on the first pass or I ignored the Padres, like so many others did during their forgotten decade of the 1970's.  The Cardinals had 2 that needed fixing and of course I had to work on overcoming one very bad Topps airbrush of Gary Matthews of the Braves. 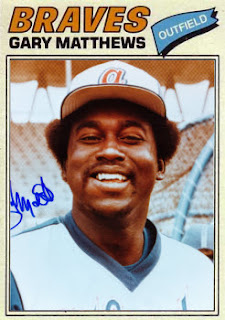 Hands down the happy Matthews on the right wins the day.  Topps didn't do a horrible job airbrushing his helmet on the original (left), but they over colored the jersey and that made me fixate on the helmet, so it had to go.  The shot on the right is an autographed photo of Matthews that I found on ebay.  Since most teams were typically pictured in their road uniforms on Topps cards, I really liked the fact that the updated photo was taken with his home "whites" on. 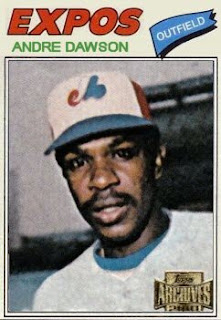 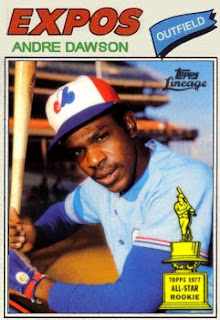 This was a huge upgrade.  On the left was one of the first cards that I did for the project.  Actually it was the card that started the project.  In '77 Andre Dawson had just a rookie panel card from Topps.  I felt that a HOF'er and one of my personal favorite players needed a true rookie card.  I used the Topps Archives card on the left, but that photo was so grainy.  Obviously it didn't bother Topps, who re-issued that card in 2004, but it bugged me.  Then I stumbled upon a Topps Lineage card that was released in 2011 (right).  The photo was probably shot in either '77 or '78 at Shea Stadium, so it has a young "Hawk" and seems very credible to use for his rookie card.  I loved the fact that it had the "coveted" Topps Rookie All-Star trophy superimposed on the card.  That was the clincher for me. 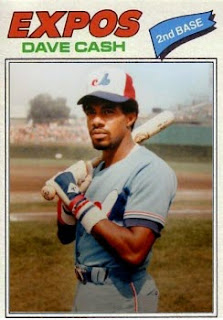 After 3 straight All-Star seasons in Philly, Cash signed as a free agent with the Expos in the off-season.  Since he signed on November 17, 1976, the good folks from Topps had more than enough time to airbrush him into an Expo uniform and cap.  The original (left) was semi-credible, but the updated photo (right) taken at Wrigley during the '77 season is much better.  The photo is a bit out of focus, which really makes it look like something Topps would have used during that era. 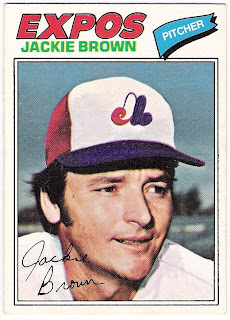 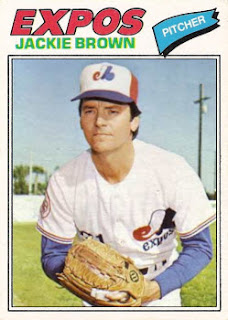 On your left you have O Pee Chee's airbrush job.  On your right you have the photo used for Brown's 1978 Topps card.  His 1977 Topps card had him still wearing an Indian uniform.  On December 10, 1976 he was traded from the Tribe to the Expos for a struggling Andre Thornton, which would go down as one of the best trades in Cleveland history and one of the worst in Expos history.  Thornton went on to become one of the best Indians ever and arguably the best DH of his era, while Brown was out of baseball after the '77 season.  Interestingly Topps and O Pee Chee both made cards for Brown in 1977, but neither made a cardboard tribute to Thornton. 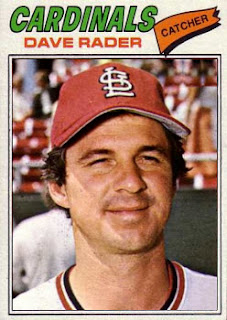 After 6 seasons with the Giants Rader was dealt to the Cardinals.  Topps broke out the airbrush and changed raiders cap from black to red and removed the SF and added the StL.  I originally tried to cut and paste a new cap on top of his head, but it just didn't look natural.  Instead I used his 1978 Topps card photo as the replacement picture.  Both were headshots.  The new one (right) was minus the caterpillar above his lip. 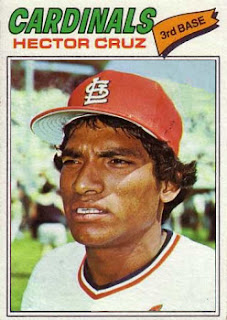 Nothing really wrong with the original (left) that Topps billed as an "action shot", but the updated photo (right) shows Cruz sporting his Cardinals cap not trying to put one on.  The updated shot comes from his 1978 Topps card. 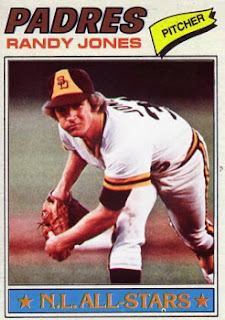 There are a few things that we can be certain about:  Randy Jones was an NL All-Star in 1976 and Topps really loved that "action shot" of the wind hitting his 'fro while he was warming up.  Another thing we can be certain about is that I liked the real action shot that was originally a SI cover in 1976, the year he won his Cy Young Award.  All I had to do was airbrush out the text and crop it to fit the card.  IMO, a huge upgrade ! 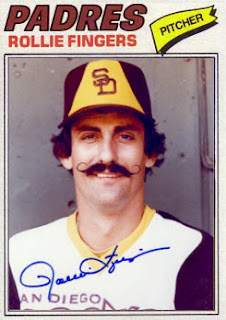 It seems like everyone, especially the Padres, was signing a former Oakland A's free agent in the off season. Reggie Jackson got all the press, but Rollie Fingers was a dominant reliever and a big windfall for whomever inked him.  Topps once again went to the airbrush and turned Fingers from an Oakland A's player into a Padre.  Originally I felt that the airbrush was credible enough to live with, but the more I thought about it the more I felt that any airbrush is an insult to a HOF'er.  On the right I updated Fingers' card with an autographed photo found on ebay.  We go from a Spring Training look (left) to a classic dugout look (right). 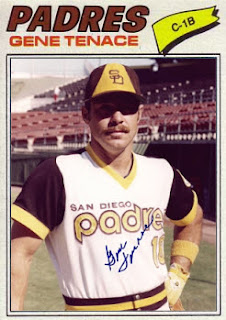 On your left you have a classic Topps airbrush of Gene Tenace.  If you look closely over his right shoulder you will see an Oakland Athletic coach probably hitting fungoes.  How do I know it's an Oakland coach ?  He's wearing the traditional white cap with green brim that Oakland coaches and managers wore during the 70's.  I'm also quite puzzled as to the venue of the photo.  I see a Shaefer Beer sign above the coaches head that looks like it could have come from old Yankee Stadium.  If that's correct, Topps airbrushed a photo that was taken in 1973 or earlier, since Old Yankee Stadium closed down in October of 1973.  To make things more realistic I found an autographed photo on ebay of Tenace wearing the real home uniform of the Padres and not a doctored up one like you see on the left.  San Diego must have thought that collecting former Oakland A's players could buy them a pennant.  Along with Tenace, they had Fingers, George Hendrick and future A's reliever Bob Owchinko, yet they still lost 93 games. 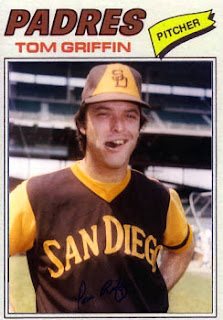 Topps decided to airbrush the most faded spring training photo they could find (left).  When you look closely the cap looks like it was made out of corduroy or some weird material.  The updated photo (right) was found on ebay.  I found it interesting how Griffin posed with what looks like about 2 cans worth of Skoal "pinched neatly between his cheek and gums".  I'm betting that a wad of that wound up on the plaid pants of the unsuspecting photographer.
Posted by ARAIG EXPOS at 10:43 AM