After I loaded the cards into my PlayerPhotos folder and fired up the game I found out that I completely forgot about a handful of cards.  At first I thought I misspelled them or misplaced them, but upon further review I realized that I just flat out dropped the ball.  So much for my "Six Sigma" Program :) !  Here are the few that I missed.  This completes the set.  From time to time I will update the set if a better photo appears.  An example of a better photo is the Mike Cuellar card that I'm posting here.  I found a better photo on the OOTP site yesterday and added it to the card.  I will be updating some Blue Jays cards thanks to Chris Jackson's scans and Rick Ambrozic's O Pee Chee card scans.  Stay tuned... 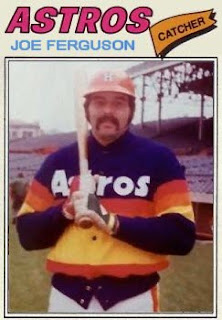 This photo proves that not only were the Astros uniforms of the late '70's ugly, but their jackets were even uglier.  Ferguson, who is best remember for his two tours of duty with the Dodgers had his 1977 card issued by Topps with him in a Cardinal uniform.  Ferguson hit .257 with 16 homers, which is exceptional when you consider that he played half of his games in the Astrodome.  Midway through the following season he was dealt back to the Dodgers for Rafael Landestoy and Jeff Leonard.  The Dodgers needed a strong bat off the bench and a backup catcher, so the deal worked for them at the time.  Landestoy was a good middle infielder for Houston and Leonard would go on to be a prime time player in San Fran. 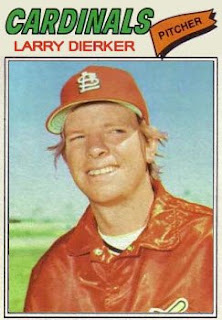 Dierker was on his way to a Hall of Fame career in Houston, but injuries curtailed his effectiveness and he wound up spending one uneventful season in St. Louis before retiring at the age of 30.  During his 14 year tenure in Houston he became the franchises 1st 20 game winner and threw a no hitter in 1976.  In 1977 he was 2-6 with a 4.58 ERA for the Cardinals in 11 games (9 starts).  I used his '78 Topps card for this updated card photo.  The Cardinals had to know they were trading for damaged goods when they acquired him along with Jerry Davanon for a minor leaguer and Joe Ferguson in December of 1976.  St. Louis released him in Spring Training of 1978, when it became obvious that he couldn't physically perform up to the All-Star level that he was once accustomed to.  His final career numbers in 14 seasons was 139-123 with a stellar 3.31 ERA. 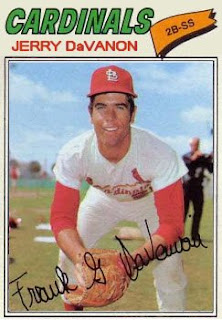 St. Louis loved DaVanon enough to acquire him 4 times and let him go 4 times.  His travels are more interesting than his actual career.  His final Cardinal stint lasted 8 at bats over 9 games, where he went hitless.  On May 11, 1977 he was given his outright release by the Redbirds, which ended his career.  Interestingly he went from the penthouse to the poorhouse in just 1 season.  In 1976 he hit .290 for the Astros while filling the role of utility infielder.  The following season he was gone from baseball.  The only color photo I could find of him in a Cardinal uniform was from his 1971 Topps card, which I decided to use instead of colorizing a B&W photo that I found on ebay.  Who knows, if I get bored I might just colorize it and update the card. 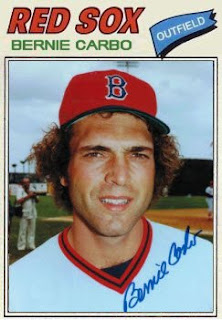 Carbo was one of those guys who always looked to be having fun while playing the game.  Unfortunately for him it wasn't all fun and games.  He grew up in an uncaring family where it was almost impossible to get attention.  This probably explains his crazy antics on and off the ball field.  It also explains how he sunk to the depths of addiction, which by his own admission, ended what could have been a HOF career.  Who would know that his first season (1970) would be his best.  He hit 21 homers for the Reds and was the runner up for the Rookie of the Year Award.  Carbo is best known for his 3 run homer to dead center in game 6 of the 1975 World Series that set the stage for Carlton Fisk's walk off game winner.  If 1970 was his best season, his 5 years in Boston would be his best stretch.  Once Red Sox ownership found out about his drug problems they dealt him to Cleveland and things got even worse for him.  Thankfully he righted his ship in later life and even got inducted into the Red Sox HOF.  In 1977 he hit .289 with 15 homers in just 86 games.  I found this autographed photo of his on ebay and used it for this card, which I somehow forgot to make.  Topps originally issued a card with him in a Brewers uniform.  He played with Milwaukee from June 3rd 1976 until the end of the season, when he was traded back to the Red Sox. 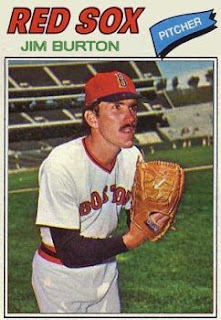 Best known as the losing pitcher of game 7 in the 1975 World Series.  Burton, a lefty, was brought on in the 9th to face the lefties that Cincy had scheduled to bat.  He walked 2 then served up a bloop single to Joe Morgan for the game winner.  He spent all of '76 in the minors and only resurfaced in '77 for 1 game before being dealt to the Mets, where they assigned him to their AAA affiliate Tidewater.  I used his 1976 Topps card for this updated 1977 card. 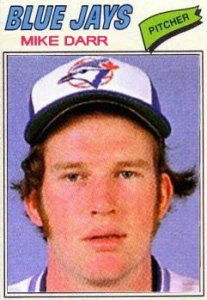 Darr's full major league career lasted just 1 1/3 innings in 1977.  He gave up 3 hits and 5 runs.  His lifetime ERA stands at 33.75.  How he got to the majors is a mystery unto itself considering he never rose higher than Double A ball prior to his one appearance.  His one shot at Triple A saw him go 6-16 for Toronto's Syracuse affiliate in 1978.  He was sent down to A ball the following year and went 10-9 (3.21) for Kinston of the Carolina league, before being released at the age of 23.  His son Mike had a promising career with the Padres, but died in a tagic car accident after 3 seasons.  This photo comes courtesy of a scan from Chris Jackson.  He scanned it from a Blue Jays anniversary guide.  I dare say  it's probably the only photo of him in a Blue Jay uniform.  The original was very small, which is why the final result is a bit grainy.  I'm ecstatic to have it.  I was planning on just leaving him out of the set figuring that he played in 1 game and got bombed. 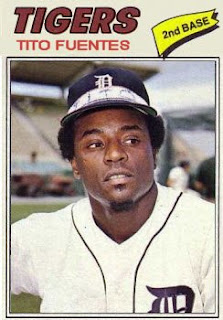 In 1977, Fuentes played with the Detroit Tigers and had a career-best .309 batting average. Despite having his best season, he was not brought back in 1978 (since the Tigers had a young Lou Whitaker waiting in the wings). The Montreal Expos then purchased his contract. Before the start of the season, however, Fuentes was released. During the year, he signed with the Oakland Athletics, but he was released again after batting just .140 in only 13 games. He retired shortly afterward.  Fuentes' best seasons were with the Giants.  In 1973 he set the record for best fielding percentage by a second baseman, which stood until Ryne Sandberg broke it 13 years later.  Know throughout his career for wearing his trademark "Tito" headband over his cap, while playing the field Fuentes considered himself the #2 hotdog of the 70's next to Willie Montanez.  The photo used here was used by Topps for his 1978 card. 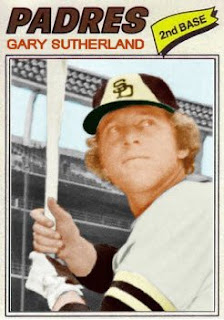 Sutherland hit just .243 as a utility infielder for the Padres in 1977.  He played for 7 different franchises in his 10 year career.  He is most remembered as an "original" Montreal Expo in 1969, where he scored the franchise's first run.  That season would be his only season as a full time starter.  1978 would be his final season in the majors.  He got into just 10 games and hit .167 (1-6) for the Cardinals before being released.  I couldn't find any photos of him with the Friars except this one, which came from a B&W regional promotion card.  I colorized Sutherland and his uniform, but neglected to do the same for the stadium in the background. 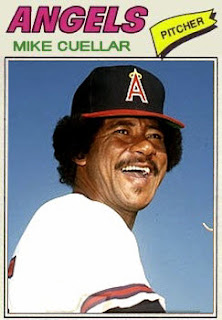 Here is an updated card for Cuellar.  The photo comes from the Topps Vault and was supposed to be used for his '78 card, which was never issued since he retired before the '77 season ended.