After the first go-round I looked through the cards that I created and realized that some of them lacked clarity or I flat out missed an original done by Topps that needed fixing.  I chose to update 23 this weekend.  Chances are there will be more.  Most of these are from the teams that I did early on in the process, since I have learned a a trick or two to make it better.  There were a few that I wanted to update, but I couldn't find photos that would work or I couldn't make them discernibly better.  I am going to break the updates out into teams, just like the original posts.  On the left side will be the original and on the right will be the update.  The first update post will include the AL teams and the second the NL teams.

First Up...The New York Yankees, since you have to defer to the actual champs. 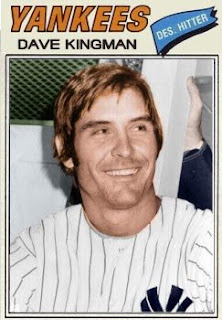 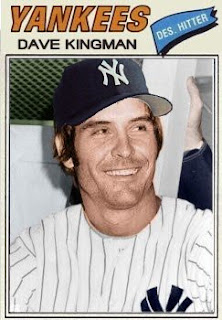 The original was a colorized photo that I believe came from one of the NYC tabloids.  I took the original that was in B&W and ran it through my colorization process.  The updated photo is a sharpened photo with a Yankee Cap.  I find it a bit ironic that I found the cap on a Roger Clemens Yankee card.  Clemens might be one of the most reviled former Yankees and Kingman is definitely one of the most reviled former Mets.  Most don't even remember that he played for the Yankees for 2 weeks in September of 1977. 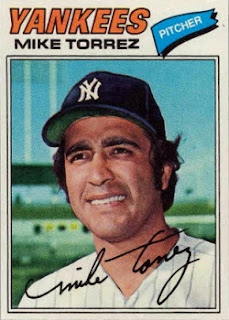 Topps' original issue for Torrez had him on the Oakland A's, where he actually started the season.  Can't fault Topps on that one.  What you can fault is Topps for the updated card on the left, which was issued in NYC as part of a mid-season set from Burger King.  No reason Topps couldn't have taken the 4 train 20 minutes north from Bowling Green Station up to 161st and River and shot a few photos of Torrez in a Yankee uniform.  They basically airbrushed one of the photos taken in 1976 at the Oakland Coliseum.  What I did was copy/crop a cap off another Yankee player, then pasted it onto this BK card photo.  Is it perfect, no.  Is it better than the original airbrush job ?  IMO, Yes.

Next up are 3 players from the Boston Red Sox, who fell a couple of games short of beating out the Yankees for the AL East Crown. 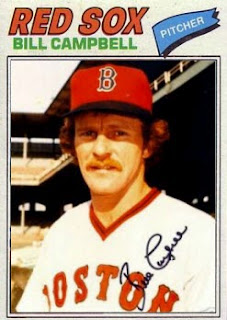 Soup's (don't you love that original nickname ?) original Topps card is an airbrush job done on a photo taken while he was with the Twins.  How did I miss this one ?  No clue.  It's obvious that they crayola'ed his cap, but left the jersey trip as is.  I guess the good folks on Whitehall street figured we'd miss that bit of detail, which I actually did on my first pass.  The updated photo used came from a google search.  I liked the fact that it had an autograph in black, which was kind of similar to the Topps model for the '77 set. 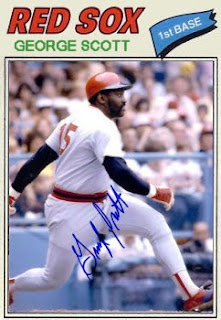 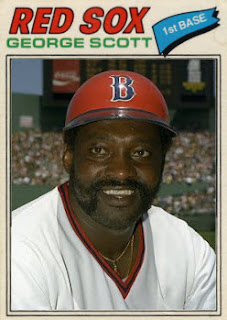 Since Topps' original George Scott had him on the Brewers, I had to update it to add him to the Red Sox.  Originally I chose an action shot (left), but after finding this great picture on the right while doing a google search, I had to update it.  Nothing says "Boomer" better than a smiling picture of him sporting his gold capped tooth in the front.  That's why the updated shot on the right is a keeper. 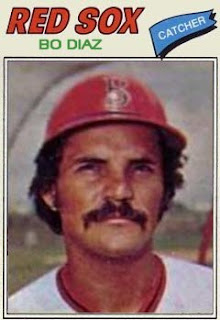 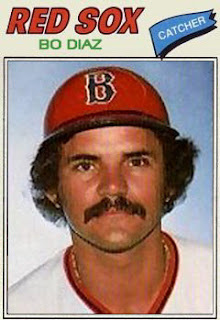 The original shot on the left came from Diaz' 1978 rookie panel card from Topps.  Those panel cards typically had grainy/out of focus shots.  One of our community members scanned a picture of Diaz and a few other Bosox and sent it to me.  For the life of me, I forgot who sent it.  Let me apologize right now for not remembering.  When I figure it out or find the original e-mail I will duly credit you.  In any case, this shot on the right is a ton clearer and had to be used. 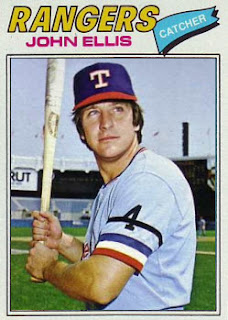 The Rangers acquired John Ellis in 1976.  In fact Topps issued one of it's infamous "TRADED" cards for him, so you'd think they would have had a decent photo of him in a Texas uniform for the 1977 set.  Guess again, as evidenced by the poor airbrushing done on the original (left).  For the updated card I took his 1978 Topps card photo and used it.  Strangely, Ellis played for 6 or 7 years with Texas, yet Topps used at least 2 or 3 airbrush shots for him in subsequent years. 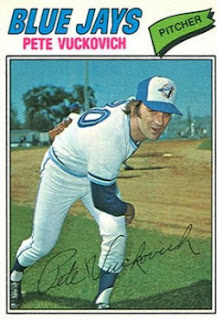 Topps really went all out when they did their airbrush job (left).  The cap log was way too small and the jersey is navy blue and looks like something the White Sox wore during this era.  The updated card on the right was actually the card issued by the O Pee Chee set in Canada.  Apparently the folks at O Pee Chee valued a real photo more than the folks who they bought the card license from (Topps).  Of course O Pee Chee was selling to a Canadian audience, and the expansion Jays were Canada's newest team.  Originally I missed this O Pee Chee card, because they are so hard to find here in the states.  Occasionally you will see a few for sale on ebay, and when they do I jump on downloading the photos. 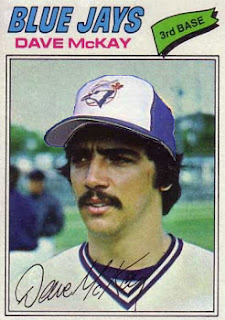 Topps did a pretty darn good job w/this original airbrush, which is why I didn't spend any time updating it.  I played around with the original and updated it with a "real" cap, which I'm not thinking I should have darkened a bit.  In either case it never hurts to have options, so I will let the Blue Jays manager in ARAIG choose which of the two he prefers. On the left you have a credible airbrush job of Mason taken while he was a member of the Yankees.  Topps did a sound job airbrushing the front of the Yankee cap to add a white panel and the Blue Jay logo.  The color is definitely Yankee blue and not Blue Jay blue, which was obviously lighter.  On the right is the O Pee Chee card taken in Spring Training. 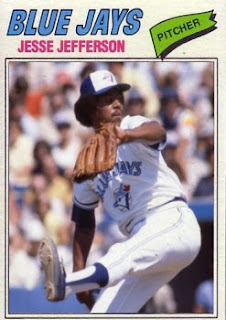 On your left you have an average airbrush job done by Topps.  On the right, you have a pretty good action shot that I found while doing a google search.  The live action shot wins out.  Kudos to Jefferson for sporting a sharp 'fro.  Even though he's no Oscar Gamble, this is a pretty good effort. 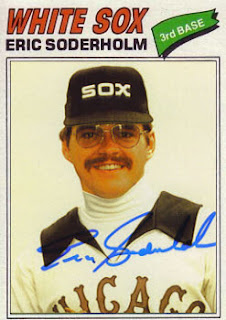 Soderholm spent all of '76 on the DL.  Prior to that he was with the Twins.  Topps airbrushed his Twins uni and made it look like Satin PJ's.  Quite possibly this might have made a good line for Victoria Secret to market, but it just doesn't cut it for a professional major leaguer.  While searching ebay I found this autographed photos (right) and replaced the pajama-gram on the left. 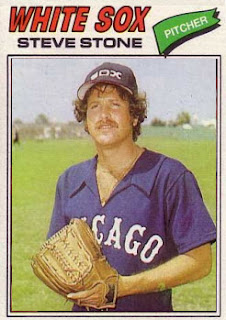 In 1977 Steve Stone moved back from the crosstown Cubbies to the Chisox, where he played in 1973.  Most of the time Topps would have dipped into their archives and used the '73 card photo or pictures from that shoot, but this time they couldn't because the Chisox changed their uniforms once again.  Apparently the best way to hid a bad team is to keep changing their duds.  The Chisox went from their classic black and white pinstripes in '68 to a light blue uni.  Then in '72 they went to red uni's.  By the latter part of the decade they were sporting collars and short pants.  I used Topps' '78 card photo of Stone sporting his collared shirt.   Judging by the look on his face I am going to assume that they didn't make him where the Bermuda shorts as well. 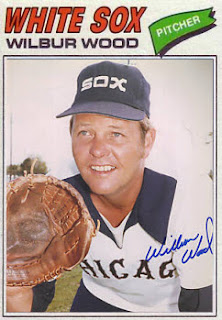 Since the Chisox were in the process of changing their uniforms once again, Topps was forced to tap into the talents of the Crayola Factory once again.  Personally, I think they should have just used the photos that they had and not played around, but I guess they wanted to have the latest and greatest look without having to dispatch a camera man.  On the left you have a credible airbrush done by Topps.  The cap looks good, but the warm-up jacket has that same "satiny" look that Soderholm's uni had.  On the right is a an autographed photo of Wood that I found while searching ebay.
Posted by ARAIG EXPOS at 9:34 AM