The perils of Richie Zisk...On December 10th, 1976 the Pittsburgh Pirates dealt Richie Zisk and Silvio Martinez to the Chisox for relievers Terry Forster and Goose Gossage.  The swift folks at Topps missed the boat and issued a card with for all three (Martinez was a minor leaguer) on their original teams.  Anyone opening a Topps pack in 1977 would have had a Pittsburgh Pirate version of the Zisk card (see below).

Have no fear Richie...the good folks at Topps decided to save you from limbo.  In addition to the 660 cards in the regular 1977 set Topps issued a cloth sticker set.  In this set Topps included superstars and some up and comers.  I'm guess Zisk was considered a superstar since he had 4 All-Star caliber years as a Pirate under his belt.  In this set they decided to put him on the Chisox.  Of course Topps wasn't about to head to Florida and take a nice spring training shot, which would have been logical.  Instead they dipped into their Crayola factory and decided to do an airbrush rendition of Zisk as a member of the Pale Hose (see below).  The sad part about the cloth set is that they turn yellow (fading) and they do not scan clearly.  When you look at one of these cards you have to adjust your eyes, because you could almost swear you are seeing a '77 card through bad cataracts. 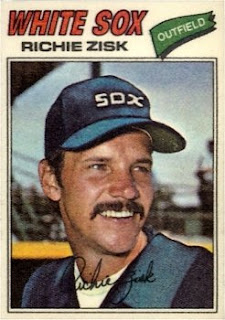 OK...don't adjust your eyes or feel the urge to clean your glasses.  That '77 cloth sticker card for Zisk came as advertised.  So here's my dillema, which only you (the ARAIG managers) can help me with:  Do we use this blurry Cloth Sticker card with Zisk being airbrushed onto the Chisox ?  Or do we use an updated version of the card that I created using a picture from the 1977 Hostess Card set (see below) ?  The choice is all yours.  Let me know how you feel.  I am in the process of adding 22 new Chisox cards to the '77 set, which to this date has been the most added per team. 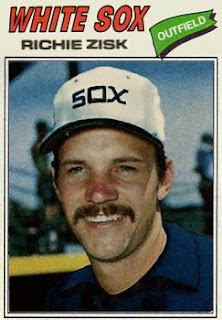