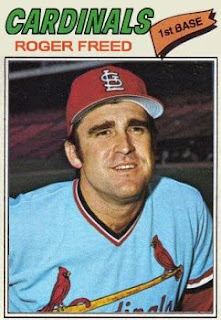 After completing hundreds of updated baseball cards and looking at countless lifetime stats I came to the conclusion that there are literally hundreds of players with similar career numbers and career paths like Roger Freed.  At first glance you see a typical journeyman type who had what the pros call AAAA skills.  This means that he was too good for Triple A, but just not good enough for the majors.  Still, this kind of player somehow captures our hearts and our imaginations for one reason or another.  In Freed's case it has nothing to do with his two International League MVP's or the fact that he captured them 7 years apart.  Heck, most guys who win an MVP in the minors don't stick around that long to have another shot at it...right ?  For Freed, baseball was a way of life.  While most guys, at the age of 30, after having bounced around 5 organizations, would have called it quits, Freed was still fighting tooth and nail to keep the dream alive.  If you have the time, search the annals of Baseball-Reference.com and you'll see similar type players who just gave it up by this point and headed back home to work on the farm, drive a forklift at the warehouse or even open an office to sell insurance.  This guy just wouldn't give it up.  I wish I could write a Joe Hardy happy ending and tell you that the magic elixir kicked in and Roger Freed became an overnight sensation at the age of 30 and rode it all the way to the hallowed halls of Cooperstown.  I can't.  I will leave those stories to the creative geniuses in Hollywood.  I can, however, tell you that all of Freed's hard work and due diligence paid off with one shining season in the sun, 1977. 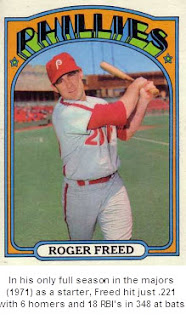 By all estimations, 1977 was a failure for the Cardinal franchise.  Sure the Redbirds finished over .500 (83-79), and they did land in 3rd place, but success in St. Louis is defined by pennants.  I would be stretching if I said that the Cardinals were the Yankees of the National League.  I would probably be insulting Cardinal fans with that comparison, because they view their franchise as a small town / regional team that is a baseball institution.  However you want to define the franchise, the Cardinals have won more National League Pennants (18) than any other franchise.  By 1977 the franchise was stuck in a rut.  In fact the 1970's, relatively speaking, would be one of the most disappointing decades for the franchise.  After dominating the National League during the late 1960's the Cardinals became also rans in the 70's.  Not bad enough to ever finish dead last, but not good enough to seriously contend either.  1976 saw them lose 90 games for he first time since Taft was president (1912).  That poor finish ended decade long managerial tenure of Cardinal legend Red Schoendienst.  Vern Rapp took over in '77 and had the flirting with a winning record.  Roger Freed, who was plucked from he Expos system via a Rule 5 draft, was just another puzzle piece sitting in the box.  Not truly part of anyone's grand plan, Freed came to spring training hoping to win a job and continue his quest to be a major leaguer.  By the end of the season Freed metamorphasized from virtual unknown journeyman into a local cult hero.  How did he do this ?  He did it by coming through as a clutch pinch hitter virtually every time Rapp called his number.  As the season began drawing to a close Freed's batting average was north of .400.  At this point I will concede that Freed's .400 (in 80 or so at bats), was not the same as Rod Carew's quest.  Carew, who played regularly finished at .388, but did threaten the .400 mark most of the summer.  Still Freed produced money hits time in and time out, which helped the Cardinals in their battle for respectability during the '77 season. 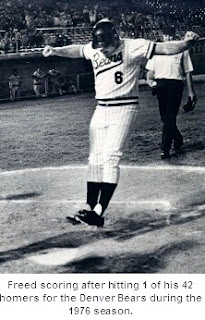 Fast forward to the final day of the season.  It's a meaningless game between a last place Mets team that narrowly avoided 100 losses and a middle of the road Cardinal team that was barely over .500.  The date was October 2, 1977.  Game 162.  Fewer than 8,000 fans were in attendance that day at Busch Memorial Stadium, which means there were well over 40,000 empty seats disguised as people.  Pat Zachry was on the hill for the lowly Mets and Bob Forsch toed the rubber for the Cards.  For most of the afternoon Zachry was cruising toward an easy victory.  The hometown team was definitely "mailing it in".  Heading into the bottom of the 8th the Cards were down 6-0.  My guess is that there were about a thousand or two left in the stands for some unknown reason.  St. Louis mounted a 3 run rally in the bottom of the 8th off a tired Zachry to cut New York's lead in half.  After the Mets went weakly in the top of the 9th the Cardinals came to bat down to their final 3 outs.  Paul Siebert, who replaced Zachry, started off the bottom of the 9th by getting Keith Hernandez to ground out to second.  Mike Tyson, the shortstop, not the boxer, doubled to left with 1 out.  Siebert walked Mike Anderson to put runners on 1st and 2nd.  Former Met Mike Phillips would line a clean single to right to score Tyson to make it 6-4.  Late season call up Mike Potter hit a bullet to left off new reliever Rick Baldwin, but Steve Henderson was able to make the catch for the second out of the inning. 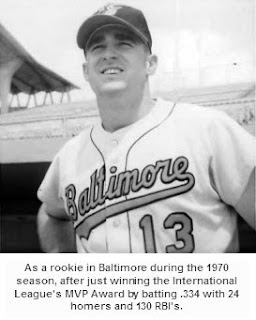 Now comes the moment we've all been waiting for.  Two outs in the bottom of the 9th and the tying run is on 1st.  The pitcher's spot is due up.  What does manager Rapp do ?  Does he call on one of his September call ups or does he go back to the well one more time a put the game in Freed's hands ?  Freed, who last saw action 2 days before, was sitting at .402.  Since he only had 82 at bats to this point he would need a hit to remain above .400.  Just 5 days earlier he was at .410, but Rapp started him in the second game of a double header on the 30th and he went 1-4, which saw his average drop 8 points.  Could Rapp ask him to take another one for the team ?  Would Freed do it ?  Of course he would.  He had given his heart and his soul, his blood and his sweat, and every other cliche' just to have a chance in a moment like this.  If it was good enough for Ted Williams to play on the final day and not sit and protect his .400 average, why would a mere mortal like Freed sit ?

So the stage is set.  Runners on 1st and 2nd.  Two men out.  A shaky reliver, Rich Baldwin, on the hill and the consummate pinch hitter Roger Freed at the plate.  If Hollywood was writing the script Freed would have hit a walk off grand slam and the place would go wild.  Since there were only 2 men on that Hollywood slam was not an option.  Still a tidy 3 run homer would have been classic.  In Freed's case a walk or a hit would have been nirvana.  Instead, Freed hit a one hopper to short that Bud Harrelson flipped to Leo Foster, who was covering the bag at second, for the final out of the game and the 1977 season.  Roger Freed did not hit .400, but he became a cult hero in the hearts and souls of Cardinal fans.  In a meaningless games at the end of a forgettable season he chose to eschew personal satisfaction in favor of team commitment. 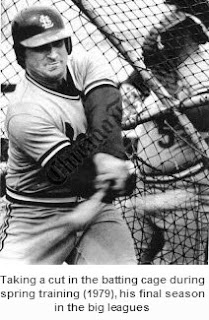 Roger's major league career would last 2 more partial season.  He was never able to duplicate his successes in 1977.  By 1979 he gasping for air, barely holding on to his place on the Cardinals major league roster.  33 year old pinch hitters, who are batting .000 don't last long in the majors.  By May 1st 1979 Freed was looking more like the 26th man on a 25 man roster, than a man flirting with .400.  In an extra inning game vs the Astros the Cardinals saw Houton break out for 3 runs in the top of the 11th to lead 6-3.  Heading out to the mound to close the game out in the bottom of the 11th was Houston's closer Joe Sambito.  Sambito was in his second inning of work having dispatched of the Cardinals easily in the 10th.  In 1977 he would save 22 games for Houston and have an ERA below 2.00.  He was definitely on the top of his game, so there was no reason for hope if you rooted for the Cards.  Tony Scott led off the bottom of the 11th with a single.  Sambito struck out Ken Reitz for the first out of the inning, but walked he next two batters (Ken Oberkfell & Steve Swisher) to load he bases.  All-Star shortstop Garry Templeton stepped up to the plate with the bases loaded and did the unthinkable...he struck out.  So, with 2 out and the bases loaded switch hitter Jerry Mumphrey was scheduled to come to the plate.  Cardinal legend, Ken Boyer, who was now managing the team went with a hunch and called back Mumphrey.  He looked to his right and gave the signal to Roger Freed to grab his helmet and his lumber and make a miracle happen.  Freed picked up his tools of his trade and headed to the plate along with his .000 batting average.  In the blink of an eye Sambito had run the count to 1-2.  Fans were out of their seats and heading up the aisles to beat the rush to the parking lot.  Freed dug down deep and battled Sambito until the count was full.  What must have been going through Roger's mind at this moment ?  Let Roger tell you himself, “My knees were shaking and sweat kept pouring into my eyes. I asked the ump (Dave Pallone) for time and took a few deep breaths. I felt a bit strange because I’d only been up two or three times in the last three weeks.”  After Freed collected himself and dug in Sambito set himself and began his wind up.  Freed got a good look at Sambito's 3-2 offering and turned on it with a vengeance and launched it over the left field fence for a walk off grand slam homer. 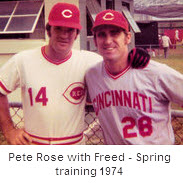 Walk off grand slams are a rare breed.  To this date only 25 have been hit in the history of major league baseball.  To put that in proper context there have been just 20 perfect games hurled in major league history, so Freed's feat was rare indeed.  After the game Roger chatted with the press and said, “It’s impossible to describe the feeling, I’d begun to feel like I was dead wood.  “When you hit a homer to win it,” said Freed, “that’s the greatest feeling in the world.”

After thousands of games in the minors in an up and down 10 year career, Roger Freed earned his shinning moment in the sun.  Roger would tragically pass away in 1996 due to heart disease at the young age of 49.  He was a tireless worker, who never gave up on his dream and had to have the jersey literally taken off his back.  A true cardboard hero, who sacrificed his one chance at personal glory for the good of his team.
Posted by ARAIG EXPOS at 1:25 AM