After underperforming in St. Louis for the better part of 5 seasons Jose' Cruz was sold to the Houston Astros.  Talk about making a great purchase.  Basically the Astros got themselves their starting left fielder for the next 13 years for a few sheckles.  By 1977 Cruz was 29 years of age and ready to hit his prime.  The previous season (1976) he hit .303, but didn't have much power.  '77 was his breakout year for power.  He clocked 17 homers and hit 1 tick below .300.  I know, you're thinking "even in 1977, 17 homers isn't really all that powerful".  I get what your saying and if Cruz played his home games in Atlanta Fulton County Stadium I would have to agree, but he playe 81 games in he cavernous Astrodome...a place where long fly balls came to die.  Hitting 17 there would be like hitting 30-35 in Atlanta.  Cruz was also a solid fielder with a decent arm.  He would finish his 19 year career with a .284 batting average, 165 homers, 1,077 RBI's and 2,251 hits.  If there was a Hall of the Very Good, he would have to be a first ballot inductee.  Since such a place only exists in blogs and talk radio, the memory of a player like Cruz is relegated to pieced of cardboard with wax stains on them and the occassional MLB Greatest games ever video (Game 5 of the 1980 NLCS or Game 6 of the 1986 NLCS).

After looking at his original 1977 Topps Card something didn't look right.  "Cheo", his semi-popular nickname is pictured on the card batting from the right side of the plate.  OK, I'm not a CSI guy, but even I could tell that Topps had him batting from the wrong side, or did they ?  Did they reverse the negative ?  Was Jose playing a joke on the Topps photographer ?  Did they airbrush his card ?  Only thing to do was to get out my magnifying glass and my scanner and go to work.  My first clue was the uniform # sewn onto his pant leg.  Houston displayed numbers on their game pants.  Cruz wore #25, but on his pants leg it looks like he's wearing #2E.  No that's not a typo.  It looked like 23 backward.  What happened ?  Did I solve some big mystery ?  Actually I'm now more confused.  The star on Houston's hideous jersey matches up where it should be.  Did they airbrush it ?  Was he wearing Cesar Cedeno's pants (#28) ?  It just doesn't make any sense.  And so at 11:30pm I decided to just get a new picture of Jose and create a new card.  When I flipped the original in Photo Shop his facsimile autograph got flipped and his uni was all backward.  It didn't look good at all.  No improvement.  Mystery unsolved, but Cruz did get himself a new card and I got a chance to post something about a pretty darn good ballplayer who outside of the Houston area is all but forgotten today. 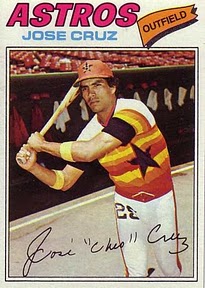 This is the original card issued by Topps in '77.  Pay close attention to the fact that his pant leg # does not look like his #25.  Also he is batting RH, and he's a lefty. 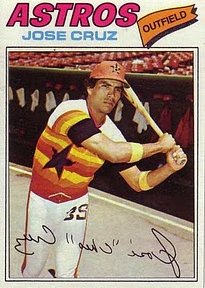 For this one I did a mirror image of the original.  The pant leg # now looks lie 35 ?  The facsimile signature is now completely reversed.  Not a good look at all. 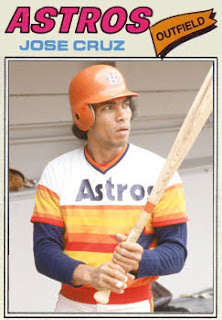 Finally I settled on this card of him peering out from the dugout and giving someone a dirty look.  Cruz was a pretty intense guy.

I'm working on the rest of the Astros set, which should be done in a day or two.