San Diego finished 69-93, which was good enough for 29 games behind the NL West Champion LA Dodgers.  As bad as their season was, the Padres averted last place by finishing 8 games ahead of the lowly Braves, who lost 101 games.  Owner Ray Kroc made a huge splash in the free agent market by signing former 3 time Oakland A's champions Gene Tenace and Rollie Fingers, in the hopes of turning around his franchises fortunes.  Judging by their record, it really didn't work.  The starting rotation was still subpar and in this game of baseball you can only go as far as your pitching takes you.  Superstar in the making,Dave Winfield, produced his first All -Star season (.275-25-92).  Part of that could be attributed to his maturing and the other part to having George Hendrick (another high priced import) next to him in the lineup.  Hendrick hit .311 with 23 homers and 81 RBI's.  Besides their lack of front end pitching the Padres lacked production from their infield.  Mike Champion (2B) hit .229 and Tucker Ashford (3B) hit .217.  Bill Almon and Mike Ivie both hit over .260, but neither provided any real pop whatsoever. 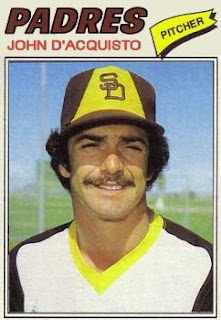 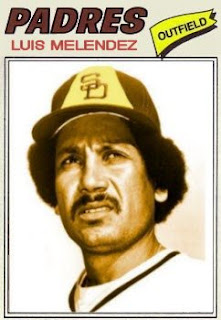 After 6 mediocre seasons as a 4th outfielder in St. Louis, Melendez was traded to the Padres for Bill Grief during the '76 season.  He would hit .244 in 72 games in a similar role for the Padres that year, but play in just 8 games in '77 and go hitless in 4 plate appearances.  It was hard to find any photos of him in a Padre uniform, so I tracked down a black and white team issue 5x7 glossy that I colorized for this updated card. 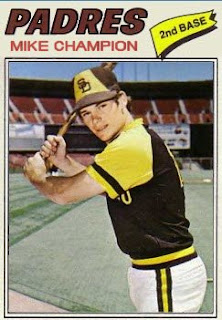 Champion was a late season call up during the '76 campaign and batted just .237 in 38 at bats.  His reward:  A starting position (2nd base) in the lineup.  Results:  150 games played, 507 at bats and a .229 average.  1978 saw the Padres come to the realization that Champion was an average second baseman with a below average bat.  In 32 games during the '78 season hit hit .226 and signed his ticket to oblivion.  He would spend the balance of the '78 season in Hawaii (AAA affiliate of the Padres) and hit .328, then hit .311 and .281 respectively at Tacoma (Indians AAA), but never see any further major league action. 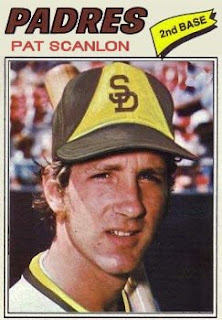 Scanlon's final stop in a short lived career was San Diego.  In 47 games he hit .190, while playing 2nd, 3rd and left field.  His 3 previous seasons in Montreal were no better.  He would kick around the minors until 1980 when the White Sox cut him loose.  I used his 1978 Topps card photo for this updated card.  Much credit needs to be given to the Topps folks for creating one of their best airbrushes ever.  You definitely have to do a double take to pick it out as an airbrush. 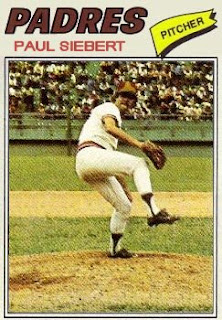 Siebert showed decent numbers in the 3 partial seasons that he spent in Houston before being acquired by the Padres during the off season.  He had a 2.45 ERA in 4 games (3 2/3 innings) of action during the '77 season before being dealt to the Mets in the Dave Kingman trade.  After 2 seasons with the Mets his major league career was over.  One final season at Triple A (Denver - Montreal) where he went 1-3 with a 5.25 ERA marked his exit from professional ball at the age of 26.  Due to the fact that he played so sparingly with the Padres it was impossible to find a photo of him in a SD uniform.  I found a Venezuelan Winter League card and airbrushed the cap and used the picture.  Since the "action shot" was taken at such a distance it was very easy to hand airbrush the cap. 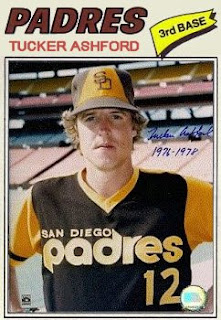 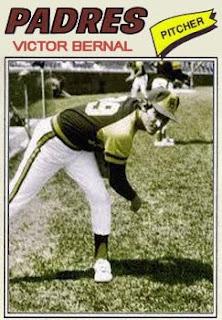 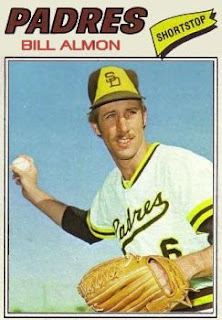 Almon played collegiate baseball at Brown University. He was the first overall pick in the 1974 amateur draft, by the Padres.  Almon led all major league shortstops in putouts with 303 in 1977 and led the National League in sacrifice hits with 20 that same year. Almon's best season was in the strike shortened 1981 campaign when, as the starting shortstop for the Chicago White Sox, he hit .301 with 16 stolen bases.  Alman hit .261 in 155 games for the Padres during the '77 season.  He would go on to have a 15 year career where at times he was a starter and at other times he was a valuable utility man who could play every infield and every outfield spot.  He played for 7 major league franchises before hanging it up after the '88 season.  I used his '79 Topps card photo for this card. 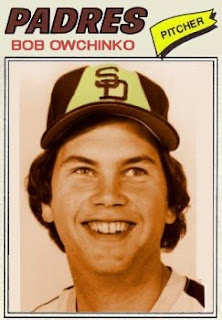 Owchinko attended Eastern Michigan University, from where he was picked in the first round (5th overall) by Peter Bavasi for the San Diego Padres in 1976.  The 22 year old Owchinko started 28 games for the Padres in 1977 and finished 9-12 with a 4.45 ERA.  His numbers would improve in '78 then level off in '79.  He bounced to Cleveland, Oakland, Pittsburgh, Cincy and Montreal before calling it a day after the '86 season.  His career record of 37-60, with a 4.28 ERA was exceptionally unimpressive for a first round pick.  I found a sharp black and white glossy and colorized it for this card shot. 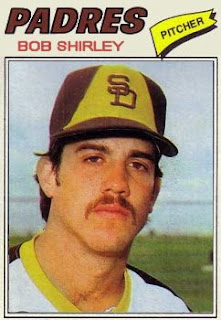 Shirley skipped several levels of minor league baseball, being assigned directly to the Double-A Amarillo Gold Sox to start the 1976 season. After posting a Win-loss record of 9-5 with a 3.32 ERA in 16 starts, he was promoted to the Triple-A Hawaii Islanders, finishing the season there. It would be the last time Shirley played in the minors until 1987.  Shirley was named to the Padres' starting rotation to open the 1977 season. He posted what turned out to be one of his best seasons in his rookie year, setting what would be career highs in wins (12), games started (35), innings pitched (214) and strikeouts (146). It was also his only year as a full-time starter, as he never started more than 25 games in a season after 1977.  I used his 1979 Topps card for this photo. 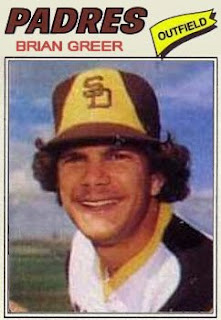 Greer was drafted eighth overall in the 1977 draft. He appeared in five games with the San Diego Padres in 1977 and 1979.  He was the youngest player on the Padres in 1977.  18 year old Greer went hitless in his one at bat during the '77 season and did the same in 3 at bats in '79.  He compiled a career .210 average in 7 minor league season and would be termed more of a "suspect" than a prospect during his entire career.  Topps created a rookie panel card for the Padres in 1980 that included this grainy shot of him.  There were no other pictures available on the web, so I attempted to sharpen this one up a bit for his new card. 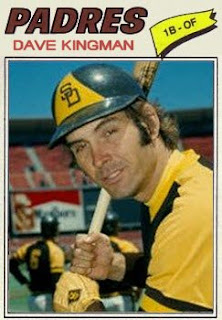 San Diego was stop #2 for "Kong" during his 1977 victory tour.  After being dealt by the Mets at the trade deadline to the Padres he appeared in 56 games and hit 11 homers in 168 AB's with a .238 average before moving along to stop #3 (California).  I found this batting pose shot on the Topps Vault site.  Apparently they were going to use it for his '78 card, but declined to use or airbrush it after he was dealt 2 more times during the '77 season.  He eventually signed as a free agent with the Cubs for the '78 season. 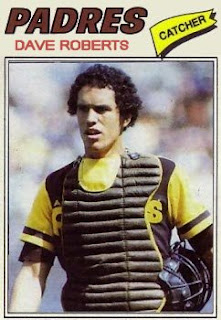 The full story behind the Dave Roberts saga can be found by clicking here.  Roberts was a good all purpose utility man who never lived up to his #1 draft pick hype.  He played in 82 games during the '77 season and hit .220.  This is a zoomed in version of his 1979 Topps card photo. 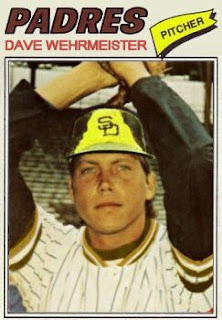 Wehrmeister was the San Diego Padres' first-round pick, and third overall, in the January regular phase of the 1973 Major League Baseball Draft. He made his major league debut with the Padres in 1976, and split the next three seasons between the Padres and their minor league system.  In June of 1979, Wehrmeister was traded to the New York Yankees for outfielder Jay Johnstone, but did not play for the Yankees until 1981, when he appeared in four games in relief.  His less than impressive 1-3, 6.07 record in '77 was compiled during 30 games (69 2/3) innings of work.  This photo was an airbrush that I did of his 1981 Columbus Clippers (Yankees AAA affiliate) minor league card.  I chose to cut and paste another player's cap onto the card and color the jersey trim to match Padre colors.  I decided to leave the pinstripes, but remove the Clippers logo. 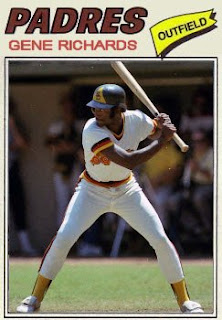 Richards made a big splash hitting .290 as the Padres starting right fielder in 1977.  He finished 3rd in the Rookie of the Year balloting after the season's conclusion.  In '78 he improved even more by upping his average to .308.  Richards' game was build on sharp defense and great speed.  He stole 56 bases during his rookie campaign.  His high point was in 1980 when he stole 61 bags and batted .301.  A career .290 hitter in 7 seasons in San Diego, Richards was dealt to the Giants midway through the 1984 campaign, where he hit a career low of .252 and never played in the majors again.  I found this 8x10 shot on ebay and decided to use it for his 1977 "rookie" card. 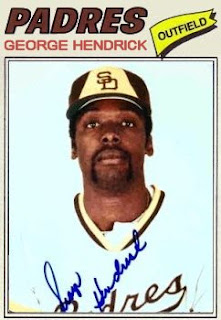 Acquired before the '77 season in a deal with Cleveland for Johnny Grubb, Fred Kendall and Hector Torres.  Consider this deal a steal for the Friars who got a .311-23-81 season out of "Silent George".  Unfortunately Ray Kroc's big plan to sign free agents and acquire guys in the last year of their contracts didn't help the team improve in the standings.  As a result, Hendrick was dealt to the Cardinals for Eric Rasmussen early in the '78 season in a deal that helped the Cardinals build their '82 Championship team.  Hendrick retired after the 1988 season after an impressive 18 year career where he hit .278 and homered 267 times, with most of his career played in pitcher's ballparks.  He would be a 4 time  All-Star and two time Silver Slugger winner.  I found this autographed 8x10 studio shot on ebay and cropped it, so it could be used for his updated '77 card.  His original Topps '77 card pictured him on the Indians, which showed extreme laziness since he was traded over to San Diego in December.
Posted by ARAIG EXPOS at 9:20 PM