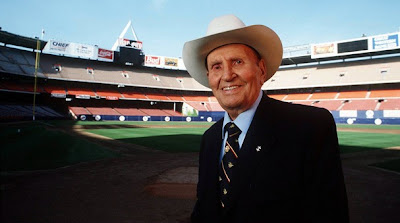 In Gene Autry's insatiable quest for a title, the Halos went out and signed 3 of the top Free Agents available.  Angels GM Harry Dalton spent over $5 million of owner Gene Autry's money in hopes of building the Angels into a powerhouse in the AL West.  Compare that method to the way the Royals built their teams, from the ground up over a 10 year period, and you have two completely contrasting methods.  In the 10 year period (1977-1986) the Royals won 6 AL West Division titles, while California won 2.  The Royals also won 2 pennants and 1 World Championship (1985), while the Angels lost both of their ALCS appearances in 5 heartbreaking games.  Would the Royals have won more championships if they added just 1 marquee free agent ?  Quite possibly so.  Could the Angels have delivered "the Cowboy" his illusive championship if they built a firmer core from within ?  In my opinion they certainly could have done a better job cultivating young arms, which is how the Royals sustained their success during that era.  If they did that and added the big bats, they could have rivaled the success of the Yankees of the late 70's since Autry had pockets just as deep as George Steinbrenner.  Of course this is all conjecture on my behalf, and it certainly makes for an interesting hot stove debate, but there is no definitive right or wrong answer.  An interesting quote from 1977 (Sports Illustrated 4/11/77) was attributed to then Brewers owner Bud Selig, "It is clear that you can't build a team through the free-agent draft. You can add to a team, you can fill in, but if your club is lousy to begin with, it's not going to make it great." 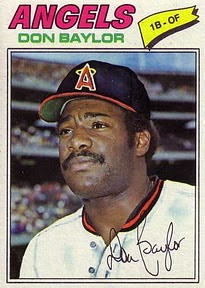 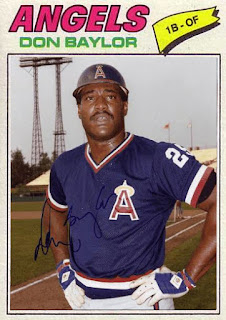 On the left is Topps original 1977 airbrush card for Don Baylor.  On the right is an updated version that I created.

On November 16, 1976 they signed slugger Don Baylor who spent 1 season in Oakland after 4 years in Baltimore.  Baylor would go on to hit 25 homers and knock in 75 runs in 154 games.  His .251 batting average would be a bit on the low side.  He did steal 26 bases while splitting his time between DH, 1B and all 3 outfield positions.  His true dividend would pay off 2 seasons later when he won the AL-MVP Award and knocked in 139 runs to lead the Angels to their first division title ever.  Balyor would spend 6 seasons in Orange County as the Angels regular DH.  He hit 141 homers and batted .262 over that span and was always a feared hitter.  Curiously he led the league in getting hit by a pitch 7 times, but none of those 7 occurred while in an Angel uniform.  Baylor moved on to play 3 seasons in the Bronx and two in Boston.  He spent most of the 1986 World Series on the bench thanks to the no-DH rule in the NL park.  When the Sox came up short in game 7, Baylor's last great chance to win a ring looked to be gone.  At the age of 38, he was traded on September 1st to the Twins and hit .286 for them in 20 games down the stretch to help them clinch the AL West title by 2 games over the Royals.  Baylor hit .400 vs the Tigers in the ALCS and .385 vs the Cardinals in the World Series to earn his 1st and only championship ring.  He would finish his career in the World Series the following year as a pinch hitter for the A's.  Baylor finsihed his 19 year career hitting an even .260 with 338 homers and 1,276 RBI's.  He would be a sure fire first ballot entry into my "Hall of the Very Good". 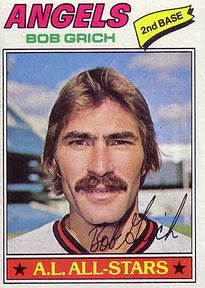 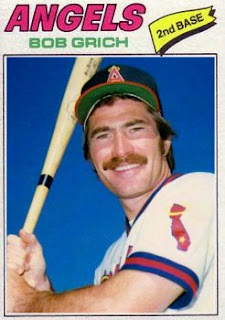 Topps knew that Grich was going to be a FA at the end of the '76 season, so they went BHNH for his card in '77.  On the right is an updated version that I created.  Topps did do a good job airbrushing the collar trim on his jersey (compare to right).

For all intents and purposes 1977 would have to be classified as an outright failure for Bobby Grich.  Coming off 4 straight Gold Glove awards as an Oriole second baseman and his second All-Star appearance Grich only played in 52 games for the Angels.  His season was marred with injuries and a strange switch to shortstop.  Grich's injury trouble can be traced back to Valentine's day 1977 when he tried to enter the Guinness Book of World Records in the category "most yards covered by a Yugoslavian second baseman carrying a heavy air-conditioning unit".  Season ending surgery was needed to remove a herniated disk after he injured his back carrying that air conditioner up a stairway.  At the plate he hit just .243 with 7 homers and looked like a total bust.  Back at his familiar second base in 1978 he began to turn it around.  By '79 he was back to All-Star status again and had his best season ever (.294-30-101).  Grich would be an All-Star the next 3 seasons and end his 10 year Angel career in the post season in 1986.  Many feel that he should be enshrined in Cooperstown.  My personal opinion is that both he and Lou Whitaker should be inducted together.  Until that happens we will find a space for both of them in my "Hall of the Very Good' 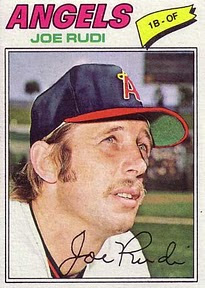 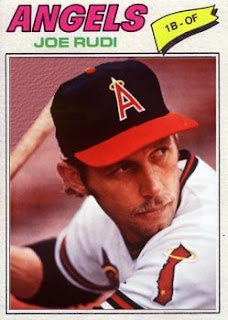 Rudi's original Topps card is an obvious airbrush job by the folks at Topps.  Rudi looks to be gazing either toward his future pay day or his past glory with the "Swinging A's".  On the right I did an updated card using the photo that SI had on the cover of it's April 11, 1977 edition featuring the top free agents of 1977.  I had to do a bit of my own airbrushing to remove the text that was superimposed over the photo.

After 10 seasons, which included 3 World Championships, 3 All-Star appearances, 3 Gold Glove Awards and twice being the MVP runner up, Joe Rudi took his star to Anaheim.  He even made the cover of Sports Illustrated trumping his much more heralded former teammate, Reggie Jackson.  At 30 years of age Rudi looked to be entering his prime.  What he was really entering was a slow decline.  It would be hard to characterize 1977 as a bust for Rudi.  He hit just 6 points below his 1976 average and he had the exact same amount of homers in almost 300 less at bats, so statistically it wasn't a bust.  Health wise, that's a different story.  Rudi played just 64 games due to injury, which helped derail the Halo's chances for sure.  1978 would see him play 133 games, but his average dipped another 8 points (.256).  This was the continuation of an alarming trend.  In 1979 he dropped to .242 and by 1980 he was at a lowly .237.  He left the Angels and wet to Boston and hit a powerless .180.  A return to Oakland in 1982 at the age of 35 was his final stop in baseball.  Rudi hit .212 and said goodbye.  Rudi's case is amazing when you look at the fact that he put up better numbers in Oakland, which was a pitcher's park, and his worst numbers were at Fenway.  When most players peak (late 20's/early 30's) Rudi began to decline.  His injuries during the '79 season prevented him from making the Angels post-season roster.
Posted by ARAIG EXPOS at 7:55 AM